Before we get started:
It seems to me that I forgot to add in a disclaimer (or whatever the equivalent might be). I often try to put things into my own words, but I only have so much time. I am also not all knowing. However, it seems that I have forgotten to put in my sources for some of these pages. And it has been so long that I have since lost what those sources are.
​The term Paganism is used as an umbrella term for many paths to spirituality. For someone like me, who is eclectic in their beliefs (pulling from many paths to form my own that is close to my heart and always evolving), it is an easy term to use to get my point across. But the truth of the matter is that there are so many different paths and ways to follow them, that no two people will believe exactly the same thing. Another fact is that humanity loves to find a way to celebrate.

When one thinks of Paganism, the first thing to come to mind is the Wiccan Sabbats. These are generally the most recognized Pagan holidays and are celebrated by many, even by those who do not identify themselves as Pagans. Many of the sabbats can be seen in parallels with other popular pagan holidays.
The Wiccan Sabbats
​
The sabbats are a good place to start when researching pagan holidays, but keep in mind that there are many more out there. It is also an incredible thing to note that many of these holidays have been practiced throughout humanity since the dawn of organized community and religion. And while they do not like to remember it, a lot of holidays that Christians celebrate have Pagan roots. It was a way to relate to the native peoples when they were on their original missions of conversion. Symbols and holidays were given new meanings to have a more Christian tone. But if one really looks at the roots and history of major holidays, they all have Pagan beginnings. Not everyone celebrates different holidays, but it is something that is ingrained into our beings as a people.
​Now the Wiccan sabbats are generally the best starting point for many, at least for research purposes. However, they are hardly the only celebrated festivals out there. Another popular path in the Western world is that of Asatru and other Norse religious paths. Through the link below is a compilation of modern festivals.
Norse Holidays and Festivals
​

I was doing a bit of research when I stumbled upon a website called Pagan's Path. There was one page in particular that caught my attention. When one searches for when to celebrate the different pagan holidays, usually exact dates will be given even though technically these are seasonal holidays. And those in the Northern hemisphere celebrate these holidays based upon what our ancestors practiced. But for those that live in the southern hemisphere your seasonal cycle is just the opposite. If these celebrations were meant as specific dates to be honored; then you might be celebrating a harvest festival when it's certainly not harvesting season. So what do you do?

Of course, that means that those in the Southern hemisphere celebrate the holidays by season rather than by date. And one of the contributors to the Pagan's Path website, who lives in New Zealand, helped to come up with a handy chart. These only include the Wiccan Sabbats, but it is still a handy point of reference as many Pagan holidays are celebrated seasonally with different names and traditions. 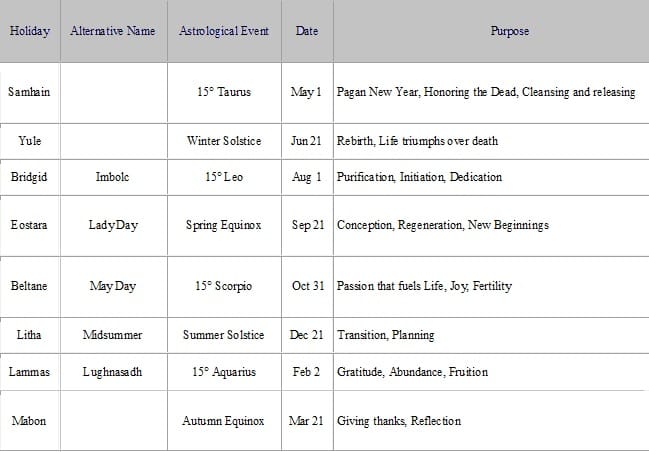